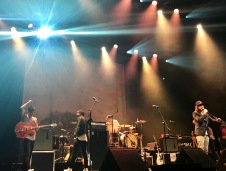 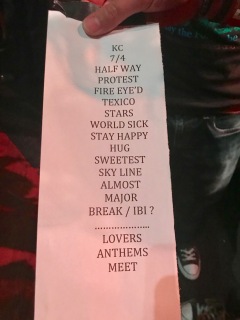 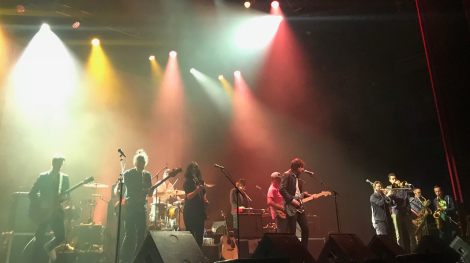 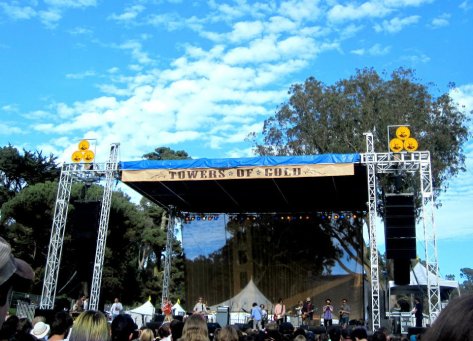 It had been a solid six years since I last saw Broken Social Scene at Hardly Strictly Bluegrass festival in San Francisco back in Oct 2011 (pictured above), and I could not have been more ecstatic to see them at the Fox Theater in honor of their recent album, ‘Hug of Thunder’ (released on July 7, 2017). ‘Hug of Thunder‘ is certainly one to HUG LIKE HELL, for it happens to be Broken Social Scene’s newest album since ‘Forgiveness Rock Record‘ (released in May 2010), and represents their revival from a 7 year hiatus. And man.. WHAT A REVIVAL is has BEEN. This 12-piece Canadian indie rock played a stellar 2-hour performance spanning their entire collection (set-list above), including a large number of songs from the new album: Halfway Home, Protest Song (personal favorite), Stay Happy, and Skyline. I nearly lost it when they played ‘World Sick,’ one of my absolute FAVORITE TRACKS (love the intro guitar ditty!): “I get world sick every time I take a stand… Well, I get world sick, my love is for my man.” I feel this song is especially relevant to the political turmoil in the Unites States and all of the unfortunate tragedies happening in the world today, and it as no surprise that Brendan Canning (guitar, vocals) also vocalized this relevance. It kind of reminds me of despair that is eminent in their new track, ‘Mouth Guards Of The Apocalypse‘: “I don’t wanna be scared, Or addicted to the dream… This fight is a ghost, Whose suicide was unseen.” Just got the chills.
After treating us to a special rendition of ‘Anthem for a Seventeen-year Old Girl‘ (video below) with the lovely ladies of Belle Game (their opener), Broken Social Scene played BOTH ‘Cause = Time‘ AND ‘Lover’s Spit.’ After polling the audience and seeing a unanimous request for both, Brendan made sure no one would be let down. He then got CARRIED AWAY (literally) after climbing into the crowd for ‘Lover Spit‘ and sing most of the song while surfing in a sea of fans.
❤
AND, as if the music wasn’t cathartic enough, Brendan later initiated a group therapy session with the following request:

He then asked us to “Take this night and put it in your back pocket for (days that don’t work for you)” right before TAKING US HOME with the EPIC ENCORE of ‘It’s All Gonna Break.’ Such an INCREDIBLE NIGHT OF MUSIC. I sure hope we don’t need to wait another 7 years for Broken Social Scene to come back ONTO THE SCENE.  😛  ❤

GIVERS was a band that stole the stage when opening up for Ra Ra Riot concert (Gundlach Bundschu Winery) in late January. Their fusion of soul, funk, Caribbean and pop elements give them a unique, experimental edge unlike many other bands that I’ve come across before. While I had heard one of their songs (‘Saw You First‘) from an Austin City Limits (ACL) playlist and really liked it, I really had no idea how different the songs would sound when played live. GIVER’s performance at the Ra Ra Riot concert was so raw and captivating that you could NOT take your eyes off the stage. It was obvious that the band was genuinely having the time of their lives up there and could not be happier making people smile with their music. They were such an uplifting, cohesive group and their chemistry was so contagious that you couldn’t help but wanna join in on their cheerful energy. ‘Up Up Up‘ was surely the song that elicited the most intense reaction from the crowd and had everyone jumping up up up all the way through. Another awesome song that I really enjoyed was ‘Meantime,’ especially with the fun little beat that begins about 2 minutes into the song, and the line “Don’t get stuck in the meantime, no such thing as the meantime.” A newer song (to be released on their debut album, In light) which I LOVE is ‘Noche Nada,’ and this lyric always stands out: “The more I’m me, the more you’re you…” ❤

The chick singer, Tiffany Lamson, who also played percussion and the ukulele, was SO BADASS. Not only could she tear up those drums, but she could mesmerize you with her soulful, raspy voice that sounds like a mix between Stevie Nicks and Feist. Taylor Guarisco (vocal, guitar) is also a very captivating performer and dancer! His feet were moving so fast at one point during a song that I was SURE he was going to trip over some cords and eat it on stage! (Thank gosh he didn’t…)

During their very last song, Tiffany got so aggressive with the drums that her drumsticks completely flew out of her hands!  Since I was right in the front (facing her) of the stage, I immediately scrambled to the floor and picked them up! (I was already in the mindset of diving for things, since earlier that day–when hiking Mt. St. Helena–I dove to retrieve a dude’s hat from the side of a mountain after it blew off his head!  The coolest part about the drumsticks was that they were all shredded and torn up from Tiffany’s siiiiiick performance that night (and also that I got them signed by both Tiffany and Taylor after the show).

Because the GIVERS and Ra Ra Riot show was at a winery, the whole atmosphere and vibe was much more laid back and chill than most concerts I’ve been to. Not only were all of the bands (Pepper Rabbit, GIVERS, and Ra Ra Riot) setting up all their own equipment, but they were all hanging out in the audience in between sets and even dancing in the crowd with fan while the other bands were playing. During the last half of Ra Ra Riot’s set, both Tiffany and Taylor of the GIVERS and Xander of Pepper Rabbit decided to come join my friends (Hillary Davis, Gina MacBarb, Jensyn Hyman and Jocelyn Berry) and I for an ULTIMATE dance party at the front of the stage. It was at that very moment that I recall thinking to myself, “Wow, music truly IS the BEST MEDICINE.” Up until that night, I was in quite a rut (coming off a few crazy, not-so-uplifting weeks), and the only thing that was able to shake me out of it was this live music and all-around good energy. (I seriously was on a high for the next two weeks after that concert…ENERGY LEGS were back in FULL FORCE!)

Another pleasant surprise about that show was the fact that I met two new REALLY AWESOME chicks, Jensyn and Jocelyn, who I’m still kicking it with (months later). I’m actually going to be going with Jensyn Hyman to Bonnaroo in June! Le sweeeeeeeeeeeet! Speaking of Bonnaroo, it turns out that GIVERS are gonna be performing there this year for the first time. I remember talking to Taylor after the show about how playing at Bonnaroo was the group’s next big goal, aside from getting signed to a good record label, which they did a week later (Feb 1st) by Glassnote Records (the same label that Mumford & Sons, Two Door Cinema Club, Temper Trap, and Phoenix are on). NOT TOO SHABBY!  Taylor was a super friendly and super chatty dude (not surprising for a fellow Italian!), and it was from him that I learned about Dirty Projectors, another band that I put on this playlist.  He told me that Dirty Projectors were AMAZING, and that it wasn’t until GIVERS toured with this talented group that they realized music was their calling. Dirty Projectors liked the GIVERS so much they asked them to open the entire east coast leg of their fall tour. Later in 2010, GIVERS brought their dizzying energy to South by Southwest (SXSW) and Austin City Limits (ACL) music festival, where their infectious sound and jubilant live performance wooed Glassnote Entertainment Group’s legendary musical guru, Daniel Glass (hence them being signed by Glassnote soon thereafter). I was so amazed by Taylor’s adoration and appreciation of Dirty Projectors that I knew I needed to explore this band further. And I DID! (see my review of Dirty Projectors at the Fox Theater in Oakland) 🙂

Favorite songs: Up Up Up, Meantime, Ripe, Noche Nada, Atlantic 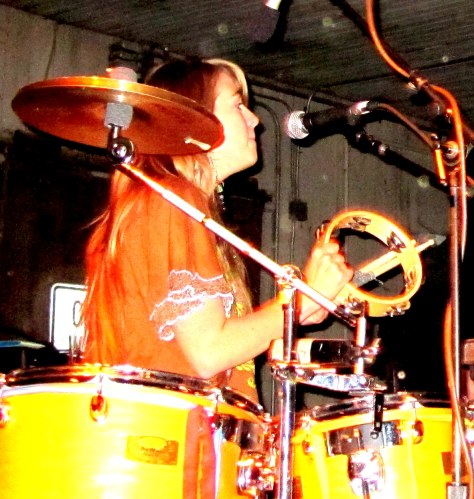 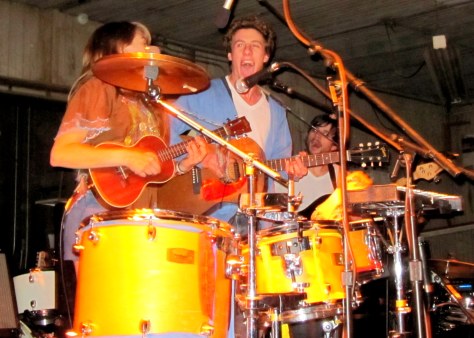 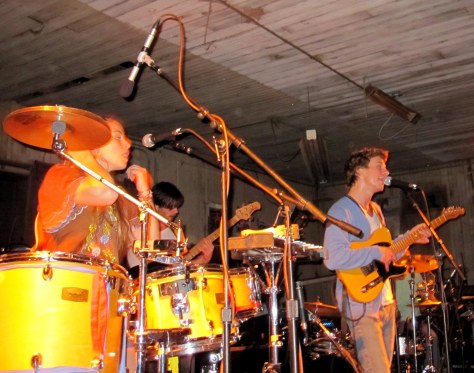 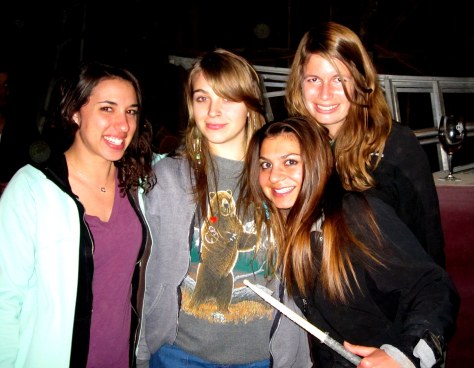 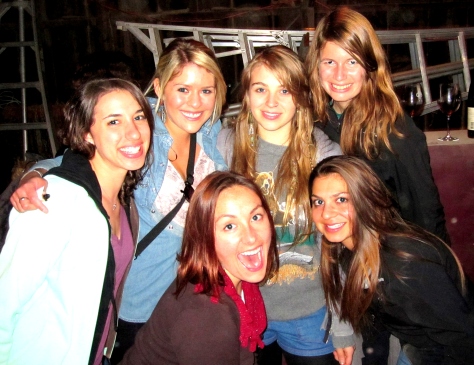 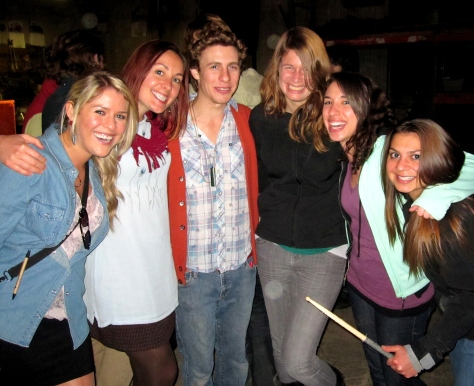 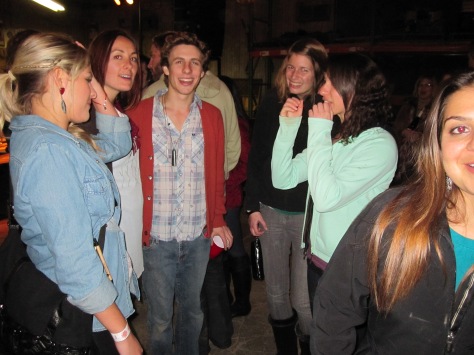 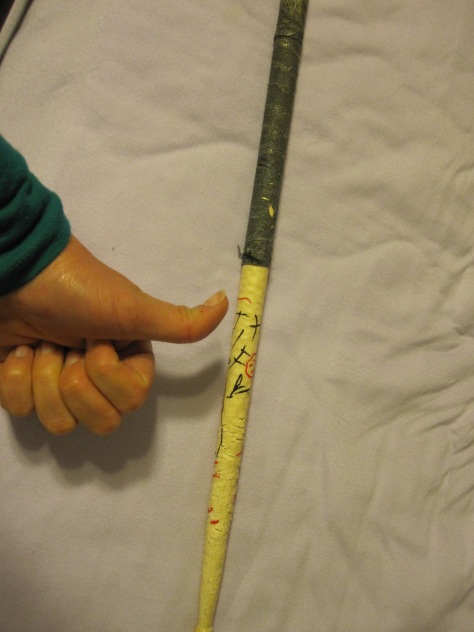