Written by Erica Andreozzi (with pics by Stefan Arosen) 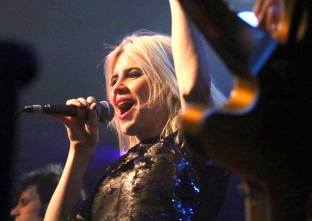 Formerly known as The Tropics, the SF Bay Area band named HEARTWATCH recently released their self-title, debut record: http://heartwatch.bandcamp.com/. In fact, they did so the same day of their SOLD OUT NoisePop show at the Independent on Wednesday. After streaming the album on Itunes and Spotify the week earlier, I was stoked to finally hear their pulsating, high-energy, indie-pop tracks translated into a night of endless dancing (and IT WAS).

HEARTWATCH is definitely a band to WATCH OUT for, and their popular performances at Phono Del Sol and Outside Lands Music Festival last year quickly elevated their stature and solidified their status as “the Bay Area’s favorite new band.” Members include: Eric Silverman (guitar, keys), Rowan Peter (guitar, vocals), Nate Skelton (bass), Kern Sigala (drums), and Claire George (vocals). Surprisingly enough, Claire – whose voice reminds me of a cross between  Nanna Bryndís Hilmarsdóttir of Of Monsters and Men and Lauren Mayberry of Chvrches – is just a girl who “been singing (her) whole life in cars to Mariah Carey and Fiona Apple” but had no prior vocal training. You would never have guessed that from the powerful pipes propelling these tracks! My favorites to sing along to are Fireproof, Sleepless, and Faultlines. I especially connect with the verse about meeting on the Golden Gate, as I do often visit this SF landmark (yes, even as a resident!): “Meet me in the middle of the golden gate and feel my heart beat.. meet me in the middle of the golden gate and our love will stay between the ocean and the bay.”

I love to see such SF pride shine through their music, and I respect their diehard devotion to the SF music scene regardless of the exponential increase in rent and the mass exodus of artists/musicians to Oakland and Portland. “People love to talk about how bands are leaving, everyone is leaving, San Francisco and getting priced out—and it’s true,” says Claire. “A lot of musicians have left. I have a lot of friends who are leaving, still. We’re hanging on, and it’s cool because we feel really supported by the community.”

That community support definitely showed up at the Independent on Wednesday , and I wouldn’t be surprised if they earned recognition one of the “Best acts at NoisePop.” Good thing they will be touring the West Coast in March and playing  BottleRock Napa Festival in May – people OUTSIDE the local community need to know about them! Don’t say I didn’t warn ya! 😉

One thought on “Heartwatch- “Meet me in the middle of the golden gate and feel my heart beat”: The Independent (Feb 24, 2016)”