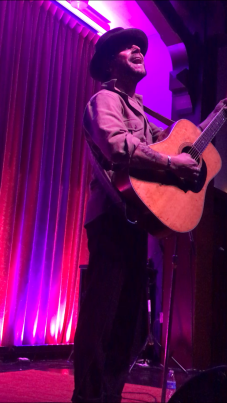 That time you meet one of the most talented folk/Americana artists out there (Langhorne Slim) after his show at the Swedish American Hall (as part of NoisePop festival) and nerd out with him about (1) effects of music on the brain (why music holds such strong memory), (2) playing music to old people (he loved playing to his Grandpa Sid and I encouraged him to play at nursing homes), (3) our perception of time (why time seems longer when we are in unfamiliar environments like when we are kids and everything is new), and (4) Langhorne (the town where he grew up but the one that I always remember my soccer team never being able to beat!). Never did I think I would have such a heart-to-heart with someone whose music had my heart when I first I heard it. Langhorne Slim is a true wordsmith whose way with words makes you feel so warm and welcome in his company, as if he was a long-lost friend that you have known for years. I couldn’t stop smiling when he was spouting off his deluge of stories (he’s certainly got plenty!) and providing context for how his various songs came to be (some in a dream). Aside from being one of the kindest, funniest, most humble human beings I know, he is one of the most AUTHENTIC, and you will never doubt that every word, whisper, belt, chuckle, howl coming out of his mouth is HIS OWN. He is not like the rest — just like Kurt Cobain (“I’m not like them / But I can pretend”) whose birthday he honored on Monday — but he does not pretend. You can certainly count on Slim NOT being slim with his self, his FULL SELF. ❤

Some of my favorite songs that he played tonight: Changes (“I’m going through changes, rattlin’ cages, I’m going through changes now”), Song For Sid (“Tell me where do all the good ones go, when they’re gone”), Back to the Wild, Coffee Cup, Again tonight and Be Set Free. It was also awesome to hear him cover Leonard Cohen‘s Tonight Will Be Fine” and Jackie DeShannon’s What the World Needs Now. Just also wish he played The Way We Move!