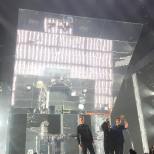 Seeing The xx during their 3rd SOLD OUT show at SF’s Bill Graham Civic Auditorium last night reminded me of the freaking PHENOMENAL TALENT that comes of the London music scene, and it made me even more grateful for having been able to soak up as much as I did when living there from 2013-2015. There’s just something so special about London’s super-saturation of collaborative artists experimenting across different genres and different ethnic backgrounds. I will never forget when I first discovered The XX at Austin City Limits Music Festival (ACL) 2010; Romy’s dreamy, hypnotic guitar pierced through crowded fields of shouting fans and HIT ME LIKE A BRICK WALL. Lured in quick, I drew closer only to discover a unique call-and-response of gorgeous male/female harmonies (perfect and seamless) alongside that dreamy guitar. I had never heard anything quite like it and was instantly hooked. I ended up listening to their debut album non-stop, with gems like Intro, Islands, VCR, and Heart Skipped Beat becoming instant theme songs that were synonymous with that festival and time in my life. A few years later, the release of their 2nd album, ‘Coexist,’ was synonymous with my excitement and anticipation for moving to London, and I remember listening to Fiction on repeat as I was packing up boxes. Their most recent album (‘I See You‘) comes to me when I’m settled back in Cali but starting to have strong melancholy for London. Like many incredible artists hailing from London, The XX had came from an “unexpected and unambitious place” (quoted Oliver last night), and Oliver was nearly in tears as he and Romy stood up straight, guitars in the air, taking in the intense energy and adoration of their screaming fans with eyes of disbelief. They blew us all away with their set, having combined old favorites (Intro, Islands, VCR, Crystalized, shelter, Fiction, Chained) with new gems: Dangerous (Jamie XX KILLS IT in this one!), Say Something Loving, Lips, I Dare You (MY FAVORITE), Brave You, On hold, & Angels, a perfect song for Romy to leave us with: “…Being as in love with you as I am.” She then followed with a departing message that will have us back to see them in a heartbeat: “We See You, and we Love You.” Ditto.