Had to sell my James Vincent McMorrow tickets for the Barbican on Jan 26th because of the Grand Canaria marathon I ran that weekend, so I was SUPER LUCKY to have caught him at his in-store gig at Rough Trade East. This Irishman has pipes that could make the gods weep, no joke. HELLOOOO FALSETTO! (see the videos below if you don’t believe me) He’s also really goofy and made the audience laugh plenty of times with his stories of insomina, fear of flying, and joggin’ at 5 am in the morning when “all the weirdos are out.” It was really cool to meet this awesome human being, and to have him sign my album (although I almost took his sharpie by accident, haha). DO YOURSELF A FAVOR and get tropical, Post Tropical.  The first song (Cavalier) of this album is INCREDIBLE, as it Red Dust and Lookout. Thank gosh I had the speakers to lean against because I nearly FELL OVER when James hits that INSANELY HIGH NOTE during Red Dust at 3:30 in.

Another favorite, Look Out, sent me on cloud to far away places. A perfect song for the occasional day dream. 😛

“You’ll be lucky once, when the fall listen to send around.
When the sun comes, dry tears from my eyes.
So you come around as the weather starts to change,
and you settle in. And the best has yet been made.”

Then there was one of my favorites from his first album, Down the Burning Ropes, which has so many twists and turns and is bound to keep you engaged.

“Down the burning ropes
Past the places where the steal beams meet concrete skies
You make your bed under the moonlight
I think it’s time we said goodbye.”

Then came the EPIC We Don’t Eat track that I had fallen in love with 2 years ago and could not get enough of the beautiful piano into…(so much anticipation/emotion conveyed through those simple chords!)…This one speaks so much truth, and send shivers crawling down the spine (especially the third verse when the tempo picks up and James goes at it on the drums). My favorite line (“I’d rather be working for something, than praying for the rain“) builds up to the chorus that we all know by heart:

“We don’t eat until your father’s at the table
We don’t drink until the devil’s turned to dust
Never once has any man I’ve met been able to love
So if I were you my friend, I’d learn to have just a little bit of trust.” (TRUTH)

Unfortunately James only had time for one more, and I think we all knew it would be Cavalier, the star of his new album.

“I remember my first love..”

Such a stunning (yes, I said it) song. Very much for the sexy time. Reminds me of bit of Volcano Choir‘s (side project of Bon Iver’s Justin Vernon) new album, Repave (also one to check out!)

Down The Burning Ropes: 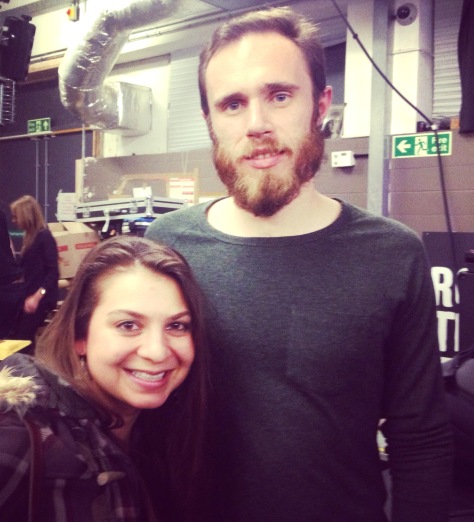