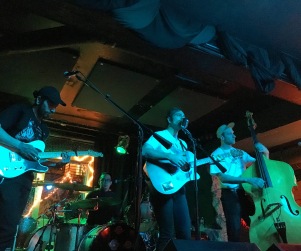 I first discovered Owls Paws when they opened for Samantha Crain at Amnesia back in January, and then of course made sure to SEE THEM AGAIN when they headlined Bottom of the Hill a few months later. The are SO GOOD. This talented folk trio has been playing together for nearly 5 years — not long after Derek Schultz (guitar/vocals) decided to extend his solo project to include fellow San Francisco State school buddies Timothy Vickers (upright bass) and Lucas Siobal (drums/percussion), and later Wayne Mills (guitar). Their haunting harmonies, alluring acoustics, and restless rhythms truly epitomize the appeal of the beautiful city in which we reside! Just like San Francisco, their sound is distinctive and captivating, and they draw influences from a variety of elements (including some of my favorite indie/folk bands like Local Natives and the Head and the Heart.

Owl Paws released their first full-length album, Reservoir, last summer, and it’s DEFINITELY worth checking out. In fact, you are bound to be keep checking out that bad boy over and OVER. You can even download it here FOR FREE! (although donations are suggested and well deserved): https://owlpaws.bandcamp.com

Standout tracks for me are: Bring Me Back (my FAVORITE), Coils of Spring, Eyes of the Prey, The Things I Forgot, The Fields, and Jagged Grin.

Having gone on several small West Coast tours an SXSW last year, and I really think THIS SUMMER is their TIME TO SHINE. Don’t miss their UPCOMING SHOW at Brick and Mortar tomorrow night. You’ll thank me later!

(see below for videos from their previous SF shows)