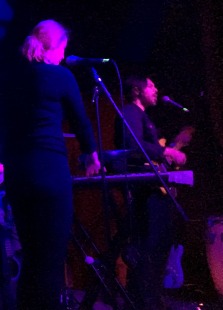 Glad to have caught Milo Greene this month after finding out last minute about them doing a show at Brick & Mortar as part of a Jukely event.  The last time I saw them was at a Culture Collide festival back in October for a stripped back acoustic set at The Swedish Music Hall. Looking back, each show was super special and unique in its own way. I always find it very impressive when bands can perform both acoustic and electric versions of their albums with flawless execution. Milo Greene does this extremely well, and their harmonies never fail to leave you feeling all warm and fuzzy inside.

I was excited when they kicked off their set early with Lie to Me, for it’s my favorite from their most recent album, Control (Atlantic Records). Robbie shed his guitar for this one to lead on vocals, and his call-and-response harmonies with Marlena are nothing short of perfect: “And you want what I’ll never be…Can’t you just lie to me?.. Lie to me.” I also really enjoyed the catchy guitar arrangements led by Graham and Charlie (Andrew’s new temporary replacement).

Next, Curtis’ passionate percussion were a perfect compliment to Marlena’s provocative lyrics in White Lies (another top track from the recent album): “And it’s not right, to keep on leading me on…From now on I won’t try, I’ll just be your white lie.”

Then came Heartless, another song from the new album that started with everyone huddled around Curtis (“The Tron”) and with Robbie joining him for some DOUBLE DRUMMING action. The anticipation was pretty SIIIIICK.

Graham’s vocals took center stage soon after with Cutty Love, and I remember first being caught off WAY OFF GUARD when I felt the power behind those pipes. He definitely covers the deep end in the group, rounding out Robbie’s tenor and Marlena’s alto/soprano with his mighty bass: “Even if your heart stops,I’ll be there to hold you up…Even as the world turns, I’ll be there to watch the fire burn…Burn us both alive.” HOT DAMN.

Just before introducing a new song that they have not yet released, Marlena confesses that she “always gets nervous when they play in San Francisco because it’s the place where it all began for them- it’s like coming around full circle.” You would never know that they were any anxious nerves behind that cool-as-a-cucumber exterior, for Marlena always owns the stage and makes you wish you were that badass chick up with there amongst 4 dudes. Nevertheless, that nervous confession quickly prompted a some males in the front row to serve her up a few tequila shots, and she took both of them back LIKE A CHAMP.

The timing of this liquid courage was pretty clutch, adding even more zest to the tasty teaser of what’s to come in their next album- a new song called Dozen Times that I could definitely hear again A DOZEN TIMES.

Up after that was an old dreamy gem, Perfectly Aligned, and I really enjoy the “Oooo-oo-ooooo Ooo-ooo-ooo” vocal harmonies perfectly aligning with Curtis’ DRUM-SET DESTRUCTION. Soooooo freaking good.

All warmed up now by the tequila, Marlena delivered a red-hot, racy rendition of Lonely Eyes, and her dancing on stage must have lit some people’s fire. Curtis’ drum were also pretty fiery in this one, and he didn’t even have any tequila!

(see below for videos and more detail from the show)