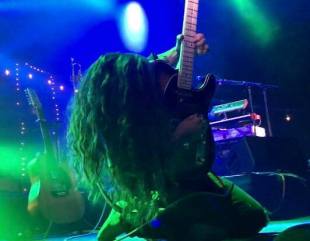 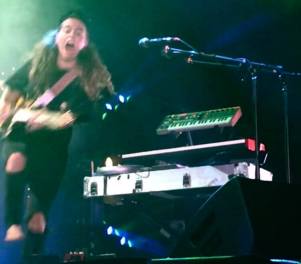 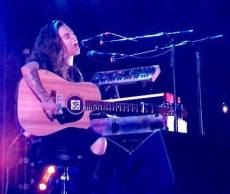 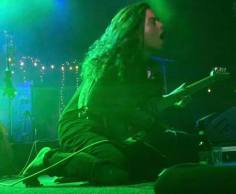 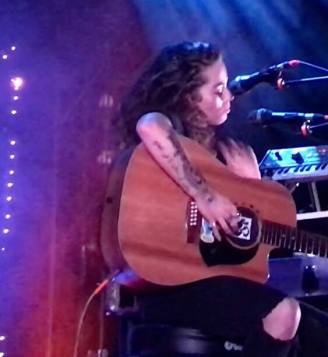 My heart begins to race as I recall the night that Tash Sultana put San Francisco’s legendary Fillmore under a spell. This gorgeous, gifted goddess — standing just 5 feet tall (my size!) — had everyone’s jaw on the floor as she flawlessly looped her hauntingly beautiful vocals with a menagerie of instruments (guitar, mandolin, keys, percussion, trumpet, pan flute, etc.) with swift execution. I caught myself grabbing my head several times (hoping it wouldn’t explode), asking myself, “HOW IN THE HELL?…” Tash first wrapped her hands around a guitar at the age of 3 years old, and I can only imagine that she clung to it for safety as others would their blankie. It’s apparent from her live performances that she plays music not just out of love, but out of necessity.  She grips her guitar like she is gripping for dear life, and watching her slay her inner demons (she mentioned struggling with mental illness) one instrument at a time (I counted at least 10) was one of the most touching, euphoric musical experiences… Pure joy for one of the most pure, self taught music makers of our generation. She’s a comet of positivity that’s set on a trajectory to change the world for the better. 😀
I first stumbled upon Tash on my Facebook feed about a year ago, only to find out later she used busk on Bourke Street in Melbourne around the same time(Winter/Spring 2015) that I lived there. In fact, my friend Megan said that she was lured out of H&M by Tash’s spine-tingling vocals, and was in a deadlock watching her magic manifest on the streets. The song that reeled her in was ‘Harvest Love,’ a track that Tash described as one “for anyone who’s having a hard time at the moment… keep on rolling.” It was therefore pretty heart-wrenching to learn later, when Megan and I saw Tash together at the Swedish American Hall back in February, that it was written about a good friend who she had recently lost: “We came to the states a while back, but I had to turn around and come back home because we lost someone very important to us a couple days later, and it kind just taught me this thing about impermanence, and how everything in your life is actually impermanent; and it’s kinda like, you know, there are two things in your like that are inevitable: you are born, and then you die… In between that gap of life and death, wherever it’s gonna take you, it’s gonna take you, and at the end of the day at some point, there is a space that you get to fill with the best vibes that you possibly can feel… We come in peace. We just ask everybody to love the FUCK out of everybody… This song goes out to anyone that has lost anyone recently. It’s called Harvest Love.” Megan and I looked at each other with tears welling up in our eyes, and we knew this one would never leave our hearts. You could tell that the intense reach of this song comes from a place of intense pain, and Tash does not hold back as she wails the first verse:

(I want to purchase ‘Harvest Love‘ but can’t find it anywhere online!)

What impresses me most is Tash’s ability to turn pain into beauty, and I was shocked to learn that both chart-topping hits ‘Jungle‘ and ‘Notion‘ were a “product of heartbreak.” ‘Jungle‘ is the song that moved her bedroom recordings into SOLD OUT VENUES ALL ACROSS THE GLOBE – a true masterpiece from start to finish. It’s as if Tash uses music as a shield again negative thoughts (depression) and negative influences (drug addiction), and is excited for others to embrace this same musical armour. In fact, she gave a nod to her US audiences who are used to “growing up in such an awesome music culture that you go because you LOVE IT, whereas back at home in Australia, everyone just wants to get fucked up all the time.” I was really touched to learn that Tash has became a mental health ambassador for Australia’s BeyondBlue, an organization that provides information and support on mental health.

I still recall being lathered in chills when I read this post on her wall back in January: “Social reminder to anyone who is feeling the heat or wants to give up. DON’T. Every time you take a step up within yourself, you take a step up within the world. In the music world or any creative path is a sensitive path to tread. Some people are going to fall in love with what you do, some people aren’t going to get it and other people are just going to be literally complete ASSHOLES. So when you come across those assholes, which you will there is a new emoji that you can use which is this

and just remind yourself that you were in a perfectly happy mood before you knew they existed, so forget they do because they’re just a bunch of cunts. Put your head on your shoulders and kick some absolute fucking ass.  Tune it up to 11, shove it in their face and down their throats And DO NOT stop creating. Oh and also don’t forget to tell them to get fucked. Keep on going. The ones the matter are the ones who show love.” That last line hit me like a brick wall, and it’s simple but profound message will remain with me forever.
Tash kicked off her set at the Fillmore with some serious smoke (‘Big Smoke‘) and has some house rules to lay down before SETTING US ALL ABLAZE:
“This is to be followed or you can please GET THE F*CK OUT OF HERE…< span style=”color: #3366ff”>1) If you are racist, get the fuck out 2) If you are homophobic, get the fuck out3) If you are transphobic, GET THE FUCK OUT. < span style=”color: #3366ff”>Cause the world can be a bit of a harsh place but I’m trying to leave it in a nice scenario… Sweeet, just don’t be a dickhead and we’re all in sweet.”  ❤
HELL YES. I’m glad there were no dickheads that night. I wish more musicians were as outspoken as she is.

After ‘Big Smoke‘ came ‘Gemini‘ (sick percussion), ‘Notion‘ (SLAYED), ‘Murder to the Mind‘ (during which she whips out the trumpet and tantalizes us with tender toots!), ‘Synergy‘ (after she jams out furiously on mandolin and BEAT-BOXES A PAN FLUTE), a song (untitled video below) with a hauntingly beautiful keyboard intro that sounds like a symphony of strings (really wish I knew the name of it!), and ‘Jungle‘ (MASSIVE DANCE PARTY – duh!). THEN, as if Tash could not freaking BLOW MINDS EVEN MORE, she TAKES A SEAT for an experience that I simply cannot put into words. It just won’t do justice. Tash first graces the strings with one hand, getting us in the groove with melodic medleys that remind me of a cross between flamenco and post-rock. But just as we start getting in the groove, Tash switches it up and starts attacking the strings with the ferocity of a lion, smiling as she does so. It’s as if she enjoys the thrill of getting us going one way and then redirecting us to see if we are still on our toes (like what I used enjoy doing with my opponents in soccer, haha). She’s got extraordinary ease with her audience that can be attributed to years of hailing crowds on a busy streets and winning the hearts of strangers. This wicked 14 min guitar solo (titled ‘Blackbird‘) exemplifies the extensive breadth of her musical abilities and the eclectic influences that shape her unique, one-in-a-million kind of sound. Tash Sultana is not only a make of music, she is a maker of magic. I don’t know anyone who is not put under her spell. I’m just so glad the world has recognized this too; Not only has she racked up SOLD OUT TOURS in US, Europe, and Australian (and soon South America), but she has recieved multiple music nominations, including Triple J’s hottest artist of the year and ARIA’s (1) Best Independent Release (Notion), (2) Breakthrough Artist, (3) Best Blues & Roots Album (Notion), and (4) Best Australian Live Act. I’ve “GOT THIS NOTION” that Tash Sultana is going to change the world with her music. Well, let’s face it – she pretty much already has. ❤

And more from Tash’s performance at Swedish American music hall back in February! 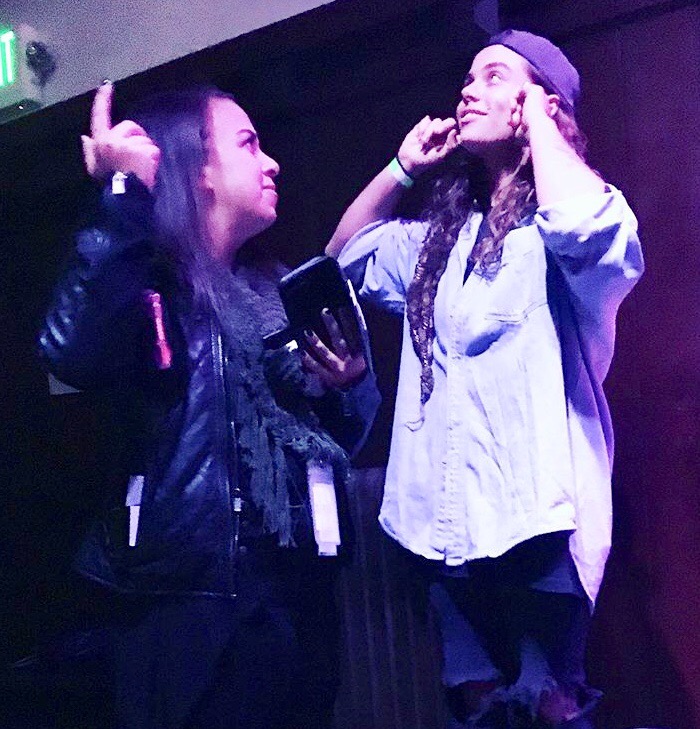 This show was one of my top 10 for 2017, alongside War On Drugs and many others.  Other reviews can be found here: She Keeps Bees, Courtney Barnett and Kurt Vile, Pierce Brothers, Silversun Pickups, Minus the Bear, and Public Service Broadcasting.

Previous Playlists: Capsized, Creature Comfort, I Know You Know, Feeling Electric, Wake Up, Oceans Away, I Want it All, Standing Rock, Jungle, When Things Fall Apart, and more…
Check out more videos on my YouTube: http://www.youtube.com/user/eandreozFacebook: https://www.facebook.com/Beatsthatsetmypulse/Instagram: beatsthatsetmypulse

One thought on “Tash Sultana: “But you keep on rolling, Like a rolling stone… And you fight until the finish line, Carries you home” – Live at the Fillmore in SF (Oct 21, 2017)”