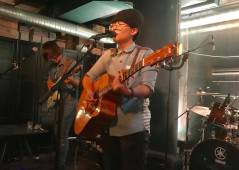 GDJYB (Gai Dan Jane Yuk Bang) were one of the top new discoveries for me at Iceland Airwaves this year. Calling themselves a “Math-folk girl band from Hong Kong and plays song in Honglish,” this badass quintet (Soni Cheng – guitarist, Heihei Ng – Drummer, Soft Liu – Vocalist, Wing Chan – Bassist).  My eyes were bugging out the entire set and bugged out EVEN MORE when I learned that they will be playing at San Francisco’s Noise Pop festival at the end of February! Can’t wait to see them again! Be sure to check out GDJYB’s debut EP (what I bought right after the set) and their first full album (11 songs) ‘23:59 Before Tomorrow,’ released in early 2017 in both Hong Kong and Taiwan. I true treat! 🙂

“If there’s a band capable of striking a successful balance between tranquility and tumult, calm and tension, it’s GDJYB, Hong Kong’s best-kept secret. Featured on the art-pop quartet’s debut album, 23:59 Before Tomorrow, the intriguingly titled “That Day I Went to His Funeral” presents a clean, smooth, and resolutely warm façade, one capable of disarming the most hardened set of ears. Beneath its alluring surface, however, the band can be heard churning out energetically swirling tangles of guitar, bass, drums, and even multi-part harmonies that in their delicate complexity fall somewhere between the Marine Girls’ jazzy post-punk and Warpaint’s dreamy tribal pop.” –KEXP

Some of my favorite tracks can be found on my recent playlist: Make It Out Alive