I had been eagerly anticipating this gig for several months now (see my previous review of them), especially considering that it would be Augustines‘ first headline show in Belfast (very cool to be a part of this), as well as the first one for my friend Laura. With this night marking my fifth Augustines‘ gig, I was excited to experience the magic all over again with those seeing it LIVE for the FIRST TIME (my god). As I recall Todd Howe (director of RISE: Story of Augustines) mentioning in the film’s trailer, “If you haven’t seen these guys live, then you have NO CLUE what we are talking about.” Belfast soon became aware of this fact by the end of the night. 🙂

At the start of the show, the fans stood back a few feet from the stage, and I was a bit taken back by this “gap” that never before existed in previous Augustine gigs I’ve attended. All in all, it took about 4-5 songs (Headlong Into the Abyss, Chapel Song, Augustines, Ballad of a Patient Man, Juarez) for the flip to switch in the Belfast crowd, but once that cold front warmed up, damn was it hot! Most of the people in the audience were only just seeing Augustines for the first time, and I can’t tell you how many people I saw completely captivated by the end. I girl even grabbed my in the bathroom after the show to say so!
*
Within those first few songs, Ballad of a Patient man was a distinct highlight for me, as I had only just discovered this gem back in August and had never yet seen it live. The blood verse reminds me alot of my blog (beatsthatsetmypulse.wordpress.com), and so there is an extra-special sentiment and connection to the lyrics:

As soon as my ears began to recognize the distinctive intro “Lift your tired..”, I LAUNCHED UP INTO THE AIR like a ROCKET. Haha! It launched me into my “own little world,” said my friend Laura who was standing next to me in slight bewilderment. This one was meant to have the heart “keep pumping blood,” even during those time when the pulse may be weak. Love…love…LOVE!

Next up was Philadelphia, One of my favorites from Augustines‘ first album, Rise Ye Sunken Ships (and it’s not just cause I’m from Philly). I love the live rendition of this one, with Eric’s piano ballad opening and closing the passageway to the “City of Brotherly Love.” I also enjoy watching as Billy eagerly challenges his vocals with this one, piping out vibratos with his “Oooo-ooo’s” before cauterizing our wounds: “Soak your scars in the ocean…”  I can’t help smile ear-to-ear when Billy hugs Eric at the end. So much love with this band. It’s utterly contagious. On a side note, we all had absolutely NO CLUE what Billy was up to with that fire extinguisher, haha.

After embracing the song that reminds me of my dirt and roots (yes, I’m talking about PHILLY), Billy makes a Birthday toast to John Panos, the siiiiick, sassy trumpet player from The Bronx. Even more, he’s an off-the-boat Greek American from NYC, and what better way for the band to shower him with love than to douse him in some Ouzo. They fill him a glass (more than half-full) of his country’s liquid courage, and Billy joins him, as if to not leave a man hanging. Billy then takes the initiative to drink to his own heritage, busting out the Jameson whisky and having to swig back more than intended due to the peer pressure of the Irish (…when it comes to drinking, they are surely hard to hang with). The crowd sings John a HAPPY BIRTHDAY, and we all wait in eager anticiaption as John and Billy duel back-and-forth (trumpet vs. guitar) as part of the intro to Strange Days, which Billy describes as a “dance song!” I absolutely LOVED this improvised “horny for some horn” (Billy’s words!) beginning, and was even a bit tempted to fire up Panos a bit as the fellow Italian American from Philly (would still have a chance in Dublin, haha). By the end of this song, EVERYONE was DANCING, just as Billy said the would.  🙂
*
After all that dancing, it was time for a Walkabout. This song had struck a particular deep chord in me the first time I heard it– a chord that would continue to resonate as I continued on with my international work experience abroad in London. At one point during this two-year walkabout, I had traveled a span of 17 countries in 15 months, and I become gripped with emotion EVERY TIME during the confessional intro: “I’ve lost my way, so bad.” I once WAS lost, but now I am found. This song has been a torch guiding my path to clarity, and it will continue to walkabout in my mind, again and again. ❤

Walkabout was followed by a DOUBLE-WHAMMY of the high-intensity, upbeat anthems, Nothing to Lose But Your Head and Cruel City, to close Augustine’s standard set. BUT, the fans were not ready to go home yet, and their incessant clapping an howling had Augustines returning back on stage for long, generous encore. Billy and Eric immediately took this opportunity to perform The Avenue while standing on top of the bar, looking out onto the crowd.

I love the one fan who kept egging Billy on with his encouraging “Sing it!” and “Who-hoo!” banter. You always need a bit of a firecracker to kick the heat up a notch! Haha.

Billy pours out his heart and soul as he wails, “Oh you just can’t see me yet…you still don’t know me after all this time.”  (SLAYED)

“I wanna love ya or leave ya
You ain’t my home
Just swinging at nothin on the avenue…Again.
(Eric stars ferociously stomping his heels on the bar)

See that in myself and GO!”

Then, Billy becomes so moved by the Belfast choir’s “Ooo–Ooo-Ooo’s” that he drops his beer on the bar, and with a dropped-jaw, quickly hugs Eric out of disbelief (and slight consolation, haha). x

Billy then shouts, “Now I gotta try and figure out a way to get the hell off this thing” (referring to the bar), and the crowd can’t help but embrace his genuine, not-afraid-to-be-himself, cool character. He then extends a big thank you their their bus driver, Lee, who’s been their “captain” this entire UK/European tour. Love. 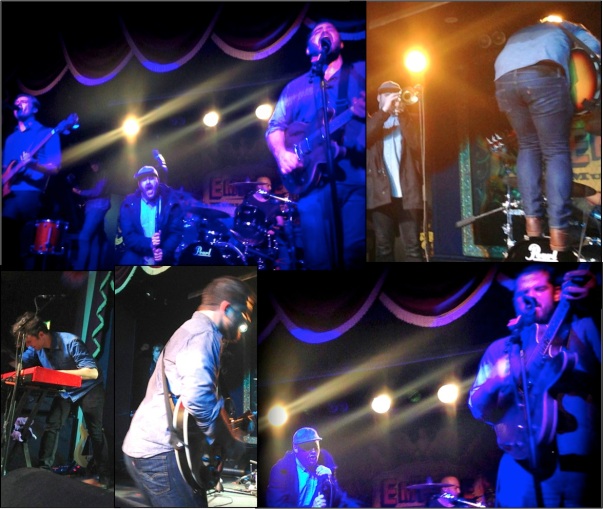 Billy and Eric then return back on stage for the MVPs (most valuable players) –Now You Are Free and Book of James– whose impact have been vital to the eminent success of Augustines and Rise Ye Sunken Ships, respectively. Both have rocked me in ways that I never knew rock music could- “thoughtful, intelligent rock music,” that is.

After these hair-raising, heart-pumpers, Billy and Eric leap off-stage to once again play songs IN the crowd, WITH the crowd. THIS is the very essence of what distinguishes Augustines from most typical bands…the all-inclusive, intimate sing-a-longs that leave us feeling liberated and loved.

Billy and Eric locked eyes the entire first chorus of Weary Eyes, as if they were reliving those never ending struggles that kept them in the dark for so long. I teared up watching this “I can’t believe we made it” unfold in front of me. As an athlete (softball/soccer/lacrosse) growing up, the longest I span I had ever had with another teammate was probably around 5-6 years. I can’t IMAGINE the depth and intensity of Billy and Eric’s 12-year, “struggle-became-our-identity” kind of bondage that had them holding on for dear life in order to fight for what they were born to do: heal people with their music. Serious emotion…(heart BEATING like a hammer!)

This verse always gets those goosebumps crawling:

“Do you remember that song
When the bar sang along and we stumbled home
Weary eyes?
We laid on the roof, drank wine and we proved
WE CAN FIX OURSELVES!” (carotids bulging as I shout along!)

Then, without warning, the one-and-only John Panos marches into the crowd and churns out even more chills with his powerful, playful trumpet. The omnipotent, holy-esque “Oh-Oh-Oh-OH-Oh-Ohs” that follow had the whole crowd praying for more.

Billy gave the crowd a few options for what to play next, including the option TO DANCE. He quickly mentions the song Pressure Drop by Toots and the Mayta, and a 70-year-old (ballpark) Silver Fox squeals like a boy on Christmas morning. Billy of course could not let this jubilant man done, and quickly gives Eric the cue for the ultimate pressure drop.

I too joined that man in a state of utter jubilation, and could NOT STOP LAUGHING LIKE A HYENA (apologizes to those around me), especially when John Panos TRUMPS in with his trumpet as Billy yells, “HAPPY BIRTHDAY!”

This song was SO MAGICAL on SO MANY LEVELS; It was so hilarious and to watch Eric, Billy, and John dancing all goofy right alongside me, while at the same time watch Rob beating that box drum like melodic madman. I had never seen this one before, and MAN did it MAKE MY PRESSURE DROP.

Following this pressure drop was a poignant, emotional rendition of East Los Angeles (“a song about hotel rooms and car parks”) from the balcony above, where coincidentally that Silver Fox was sitting…(maybe that’s why he chose to post up there!)…I was amazed to see how many fans around me knew all the lyrics. 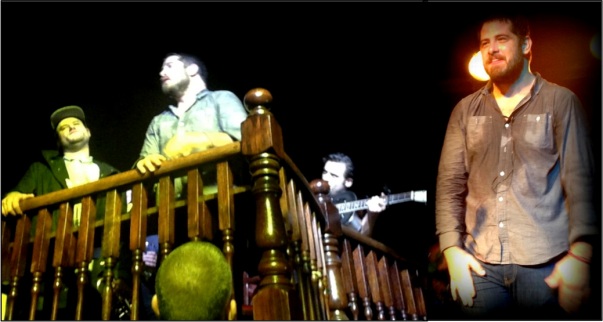 With the Belfast crowd clearly wide awake and begging for more, Billy, Eric, Rob, and John got everyone huddled around for an intimate New Drink for the Old Drunk lullaby, which Billy introduces as a “drinking song,” and then exclaims, “Wait a sec! This feels a bit..(weird)…You are my family!…I was just up there!”

He clearly wanted the crowd to not be shy and to continue to huddle around as they kicked off this song acoustic-style before Billy hands ME his guitar (DYING) and they finish it off full volume and full blast on stage with everyone ARM-IN-ARM, jumping UP and DOWN.

I was SO STOKED to have been able to say hi to them all after (haha Billy called me “Tiger”) and meet their awesome, talented cameraman, Brendon. Memories to last a lifetime. I feel so blessed and thankful fir if all. Thank gosh it was Thanksgiving the next day. Cheers to ROUND TWO in Dublin with my fellow American Brooklyn Boys. I’m glad to see that they were sporting the Irish bling that I got for them! I figured it might bring them some extra Lucky Charms for the Dublin gig. Plus, the I thought the Leprechaun hat would be an ideal replacement to Billy’s standard fedora. 😛 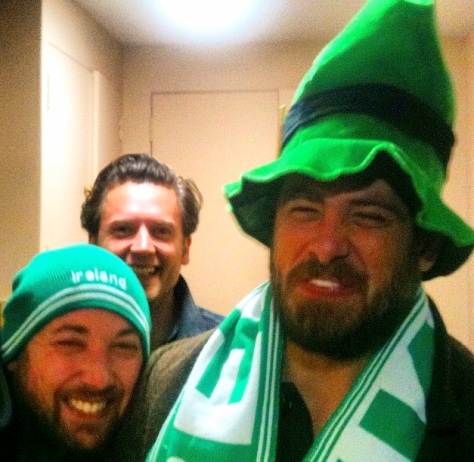 I am as serious as a heart attack when I say that their music has been one of my only constants when my world was thrown many variables. It’s been a comforting haven to find shelter and clarity, and it’s adopted me into a “family” of fans who feel the same way. The intense loyalty and devotion from this Augustines’ family is one that I have never before witnessed, and I see TONS of live music. It’s as if we all give each other “virtual hugs” with each new Facebook/twitter post, as only WE can understand the life-changing, emotional embrace of every Augustines‘ gig. Can’t wait for the REAL hugs at the Brighton and London gigs next week!