Spotify playlist (not all tracks show up…see full list below):

Cats and Dogs– The Head and the Heart

Some Boys– Death Cab for Cutie

Glittering Blackness– Explosions in the Sky

Freedom at 21– Jack White  (off his new album, Blunderbuss)

Blood to Gold– Boy and Bear

Honey Come Home– The Head and the Heart

This playlist was inspired by my recent trip to Australia and my anticipation of the Sasquatch music festival at the Gorge Amphitheater up in Washington. The Gorge is a nine time winner of Pollstar Magazine’s award for Best Outdoor Music Venue and is nominated again in 2011. I cannot think of a more SURREAL place to have a music festival (see pic below). HOLY SHIT.

I’ve never been up to the Pacific Northwest but I’ve heard it’s oh so MAJESTIC and I’ve always wanted to do the drive from Northern California to Washington. Kyle Findley-Meier, I must say that I’m “HELLA” stoked for this road trip to Sasquatch. 🙂 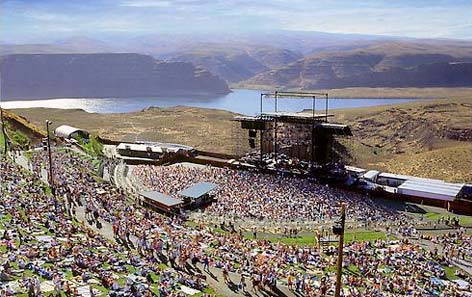 The Sasquatch Music Festival is held at the Gorge Amphitheater every year. STUNNINGLY BEAUTIFUL.

I am looking forward to many artists at Sasquatch, including ones I’ve already seen and would see again in a heartbeat- Beck, tUnE-yArDs (have a platonic crush on both her and St. Vincent), Bon Iver, Feist, Explosions in the Sky (SUCH beautiful music), The Joy Formidable, Of Monsters and Men (LOVE THEM), Alabama Shakes, Pretty Lights, The War on Drugs, Dry the River, Reptar….and  newbies I’ve waited in anticipation to see:  The Civil Wars, Trampled by Turtles, Blind Pilot, Mogwai, SBTRKT, Walk the Moon, Damien Jurado, Said the Whale, The Helio Sequence, Jack White (siiiiick), Metric (Yes!), BEN HOWARD (been stalking him for a YEAR now), Apparat, St. Vincent (f*ck yes!), and The Head and the Heart. It’s gonna be epic to see this Seattle based group (The Head and the Heart) performing in the comfort of their native roots. I am really gonna LOSE IT when “Down in the Valley” starts playing! There is a very special place in my heart for that song.

Although Damien Jurado is a very beautiful musician who I am definitely looking forward to see, it would have been icing on the cake if James Vincent McMorrow (recommended by Nicole DeJesus) would also have been on the line up. In the weeks leading up to my departure for Austin (Kelly’s wedding!) and AUSTRALIA, I was listening to a healthy dose a of James Vincent McMarrow and Alexi Murdoch, both of whom I have yet to see live. ‘Orange Sky,’ ‘Blue Mind,’ and ‘Song for You‘ became instant favorites, and the lyrics of “Orange Sky” (“Well I had a dream, that I stood beneath an Orange Sky…“) continually resonated in my head as I anxiously awaited Australia, and my chance to marvel at this: 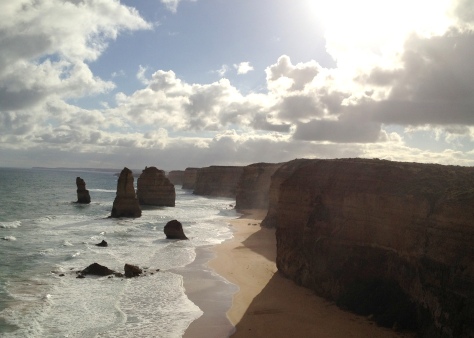 The Twelve Apostles in Apollo Bay (outside Melbourne, Australia): Part of the Great Ocean Road

‘Orange Sky‘ was the song that was playing on my ipod as I was touching down in Australia, and it was also the song that was play as I was taking off this LAND OF IMMENSE BEAUTY and DIVERSITY OF LANDSCAPE (a.k.a. an outdoor junkie’s PARADISE)…a place where kangaroos run free, koala bears let you hug their backs, green rolling hills disappear into the road, giant waterfalls decorate the steep, rocky cliffs of the Great Ocean Road, canopies of Cypress and Eucalyptus trees infuse the air with their fresh, earthy fragrance, double rainbows paint the sky, and capricious, dynamic clouds awake the sky with a unique personality of their own. It’s not “Goodbye” Australia, it’s “I’LL SEE YA LATER, MATE” (check out all my facebook pics here)

I give major props to my buddy Andy Aiken who recommended both Alexi Murdoch and And So I Watch You From Afar to me. ‘Don’t Waste Time Doing Things You Hate‘ was my theme song for when I was trying to crank out work and get fired up for my trip. If you’re batteries need recharging, I suggest you play that song. My buddy George Jacobellis is a fan of And So I Watch You from Afar, and some of my favorite bands that he’s introduced me to are Thrice, Dream Theater, and Nothing More. I would LOVE to see Nothing More perform live. These kids are crazy. Check out this drum solo SPECTACLE. (unreal)

One goals while traveling in Australia was to see a show, and what better place (so I’m told) than Melbourne, known for some of great live music on venues along Brunswick St. and St. Kilda. WHO KNEW that me and my new Aussie mates (Cara Bradley and Catherine Machabert) and I would discover an INCREDIBLE Aussie musician (from New South Whales) that is no doubt going to be HUGE once he tours Europe and the States.  Meet DANIEL CHAMPAGNE, a 22-year old solo artist (see pic below) whose vocals remind me of Ben Howard (YES, Jensyn Hyman) and whose excellent (manic strumming, thumping) reminds me of Rodrigo y Gabriela. I hope to see him on a big stage someday soon. He will definitely SHINE ON.

Cara Bradley and Catherine Machabert, ‘Nightingale‘ will forever remind me of you two fabulous females, and every time I hear the lyrics, “When I told you I was afraid to fall, really I, was afraid to fly,” I’ll be sure to remember that I am NOT afraid to fly. 🙂 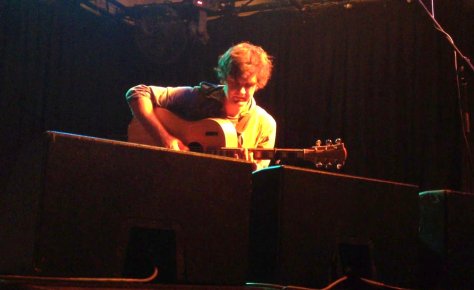 Daniel Champagne at the ESPY in St Kilda (beach subrub of Melbourne) (5/14/12). INCREDIBLE.

Other awesome music coming out of Australia is a band from Sydney called Boy and Bear, that Cara Bradley (thank you!) introduced me to. They remind me of a mix between Mumford and Sons and Keane, which is funny cause they actually toured with Mumford and Sons AND Laura Marling (two of my MOST FAVORITE artists!) in 2010.  I’ll be sure to keep on the lookout for them because I REALLY dig their sounds and I’d love to see them up close and personal.

SASQUATCH IN ONE WEEK!!! LE SWEEEEEEEET!