A review by Erica Andreozzi

I am STILL on CLOUD NINE from last weekend’s Green Man Festival in South Wales. This was my favorite UK festival of last year, so it was only fitting that it would be my last and favorite (STILL) UK festival of 2014. It might even be my last Green Man for a while, as I’ll be leaving the UK in a few months, but as least I ended it full circle. Set in the heart of the idyllic Brecon Beacons, the environment, scenery, band selection, people, and just overall vibe is really something special. PLUS, last but not least…(I thank the Green Man gods for this!), Augustines were added to the festival lineup with short notice, making this festival EVEN MORE highly anticipated than ever before. NOT ONLY THAT, but the night that Augustines were scheduled to play the Mountain Stage (pics below), was the night of both Billy’s birthday and the birthday of his brother James (who inspired the emotive track, Book of James). Grab a helmet cause there’s more! Billy and James’ double-wammy birthday is further compounded by Eric’s birthday at the strike of midnight. CRAZY ODDS. I mean, it wasn’t already enough that I was seeing Augustines in THEIR MONTH (their August birthdays inspired the name), I was seeing them at THE PINNACLE (pretty much) of THEIR MONTH. (one lucky lil’ lady) Seeing them at their summit, IN FRONT OF a summit (yes, that beautiful mountain behind the stage that everyone’s refers to as “Sugarloaf”), was just way too surreal. So many good vibes going on, so much beauty brewing around us…it was definitely one of those “pinch me” moments where I had to convince myself that YES, this was all really happening. AND, to top it off, the act preceding Augustines just happened to be Sun Kil Moon (aka Mark Kozlek), the artist that I had been listening to for weeks on end (that Benji album is ACE) and anxiously waiting to see live for the first time. I distinctly remember both Billy and Rob poking their heads out from behind the stage curtain during Mark’s performance of The Film the Song Remains the Same (one of my favorites), and I couldn’t help smile at their eager eyes and beaming grins. They were more than ready to get on stage and do what they DO BEST: Entertain crowds with stadium-size sound that somehow maintains an intimacy/inclusiveness of a small room. Unlike most bands, they SHARE THE STAGE and are genuinely excited by fans dancing and singing their songs along WITH THEM. They feed off that energy and participation, making it one big joyous sing-a-long for everyone. WE ALL WIN. 🙂

When the clocked struck 8 pm for Augustines’ set to start, the tenacious trifecta (Billy, Eric, Rob) came running out on stage like gazelles, ready to celebrate Green Man AND THEIR BIRTHDAYS with the 10,000+ grateful Green Man audience. Billy introduces the band and then shouts into the microphone: “It’s my birthday!” This immediately prompted the entire crowd to sing him ‘Happy Birthday’ while he stood up on stage grinning ear-to-ear. If this was the first time you were seeing Augustines (hard to believe from my end), you would immediately be drawn to the deep appreciation that they have for their fans. Billy was BEAMING, as if he could hear every single fan’s individual birthday cheer like it was coming from his best friend. Later on, he posted this Facebook message alongside a photo of him standing up in the sea of people: “Wales my eternal thanks. Bloodied knees and hoarse voice and an unbelievable joy in my heart. Best birthday ever…that’s me in the middle having the time of my life…“

Although their set seemed way too short to me (especially in comparison to their usual 2+ hr set), they served up a handful of hearty sing-a-longs, kicking off with Nothing to Lose but Your Head and soon following with Cruel City (it was so cool to be in front of Eric and watch him do the beats for this one). They also played Chapel Song and Headlong into the Abyss, both of which got the crowed roaring and all warmed them up on this crisp, chilly night. They then freed everyone of all their ghosts with the always compelling Now You are Free before rounding out the set. BUT BILLY, chock full of surprises, SURPRISED US ALL with an impressive BIRTHDAY DANCE (below), shouting: “I was getting fucking worried you guys were sleeping the past two hours!…”  HELLS NO. Never.

Soon after the birthday dance, I heard a girl behind be scream a request of Philadelphia, and although I’m from ‘the City of Brotherly Love’ and do love that song, I quickly  screamed Book of James because I knew it was coming down to the wire and I REALLY WANTED to hear my favorite. They usually save this heavy hitter for the end, so I had a feeling it was coming anyways. These lyrics forever resonate in my mind: “Here lies, my green eyes, rolled back in my head, but their ALIVE.” (so good) I actually thought they would close out on Book of James, but they decided to give us one more hit. Home run. For this one, Rob ditches his drums and comes close to the front of the stage to be apart of the acoustic encore that will forever be etched in our memory. Billy also ditches guitar, leaving Eric the one to hold down the fort and lead the rhythm for The Avenue. This is when Eric’s smile was EAR-TO-EAR; he was just STARING OUT at the cheerful crowd of 10,000+ with that look of, “YES, we’ve finally made it. They FINALLY GET IT.” Yes, we certainly do, and we truly hope Augustines continue to RISE UP as a band and made beautiful music that touches hearts every day. For the encore of The Avenue, Billy asks the crowd to be a ‘Green Man Choir’ and sing along with “oooo’s” during the chorus, stating: “It only works when everybody does it.” Before he knew it, the entire Green man choir was full force, leaving him “impressed” and ready to end his birthday on a verse that celebrates the wonderful human being that he is:

After the show, I was lucky enough to catch (and finally meet!) Rob and give him a pen-and-ink sketch that a women named Pauline Williams drew of Augustines on-the-spot during their set — although she said she had a hard drawing it because standing behind me…(I do get a tad rowdy). I initially saw her drawing sketches for other bands earlier that day and mentioned that she should return that night for the Augustines set. Not only did I want her to see the band, but I knew they would really appreciate her unique sketch. I got to TONS of gigs, but I never ONCE saw someone do what she does…there are always load of photographers, but never free-sketch artists. Check out the rest of her collection: http://www.paulinewilliamsart.com/collections/pen-ink

I would have been nice to wish Billy and Eric a happy birthday in person, but Rob said the band was off to Germany that night for another festival. At least we can rest assured from their Facebook post that this year’s birthday would always hold a special place in their hearts: “…such an amazing experience for us. The crowd spontaneously sang Happy Birthday to us under the night sky. Its hard to describe to you how big our smiles were. Special thanks to Wales, and cheers to all of you. Best birthday ever.” -Bill, Eric, and Rob

If you want to read more about Augustines, I posted a piece on them just last week. It might be the greatest review I ever write: https://beatsthatsetmypulse.wordpress.com/2014/08/13/augustines-to-rise-up-from-some-dirty-ashes/

Check out the kickstarter project that Big Vulture productions is running to support a film (“RISE“) documenting the band’s incredible story: https://www.kickstarter.com/projects/1638587871/rise-the-story-of-augustines 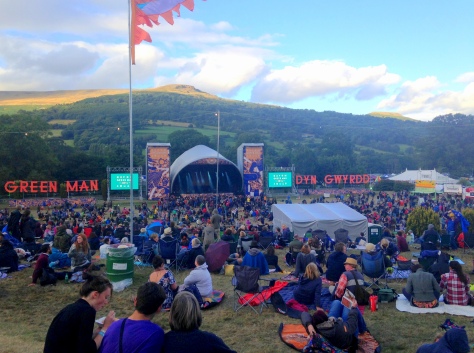 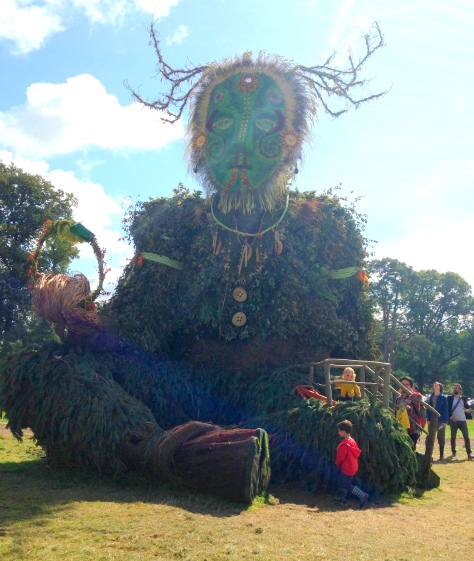 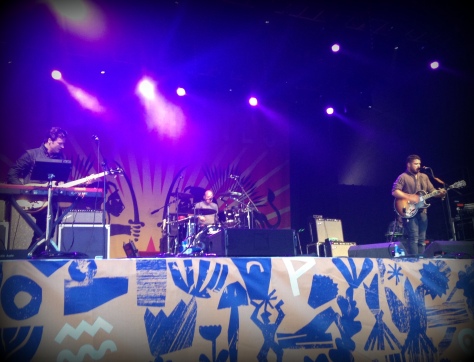 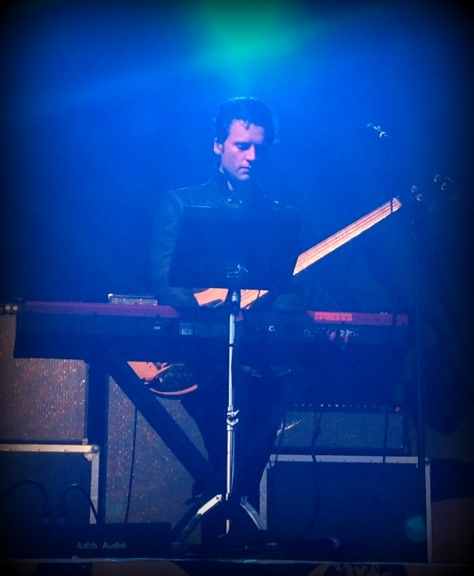 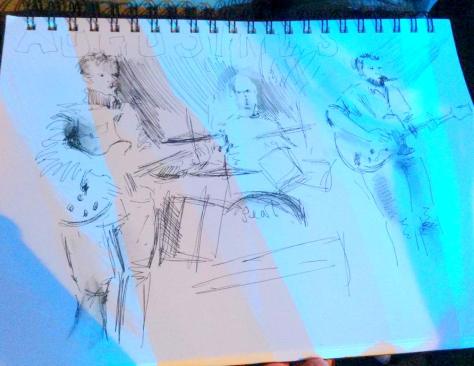