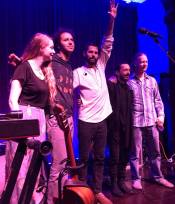 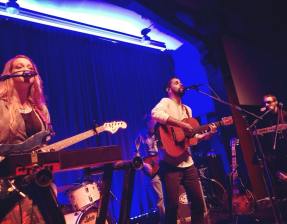 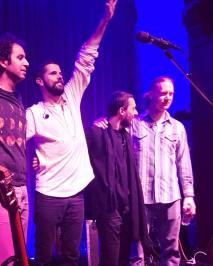 I couldn’t believe when Nick Mulvey said “I’ve seen you before!” after his Swedish American Hall show on Nov 17. He musta remembered the puppet face! I was hooked ever since that first night at Barfly and just kept showing up everywhere he played, from Green Man Festival to Shepards Bush empire (opening for Laura Marling) to O2 Brixton Academy (opening for London Grammar) to XOYO (where he played with the talented Fiona Bevan). His song ‘Fever to the Form‘ was legitimately my LIFE ANTHEM for most of 2013-2014, and that first verse “So whether music or madness, We live by one of the two… So Go on an fill your heart with gladness, not a moment too soon” will forever be my GUIDING LIGHT. It is a TIMELESS TRACK that I know will still bring me the same peace of mind and clarity (“cause the very thing you’re afraid, afraid of, It keeps you clean but unclear”) 20 years from now as it did back in 2013. ‘Fever to the Form’ was released alongside other tops tracks (First Mind, I Don’t Want to Go Home, Meet Me There, Juramidam, Cucurucu) on his debut album, First Mind, which was nominated for a Mercury Prize (well deserved!) in 2014. Nick has become a dad since the release of that album, and he considers this step to have had a positive influence on his music writing: “Putting music as a secondary priority to that (the challenge of making new music) was a really healthy thing for me.” Well, we are glad to reap the benefits of that positive influence, for his newest (sophomore) album, Wake Up Now, is freaking AWESOME. Standout tracks for me are: Mountain to Move, Remembering, In Your Hands, Transform Your Game, and Unconditional. In fact, Nick has a really cool story to go along with ‘Mountain to Move’ and I hope he continues to share it during his live performances. Cheers to the super talented British musician who studied music in Cuba and who continues to weave styles from all over the world into his musical quilt. ❤

4 thoughts on “Nick Mulvey: “Cause you got lost in comparison Always pretending you knew When everything you were looking for Was already looking at you… This moment is a mountain to move…Wake up now” – Swedish American Hall (Nov 17, 2017)”