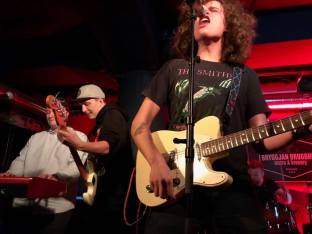 Meet Mani Orrason, a young Icelandic multi-instrumentalist whose first ever single, ‘Fed My Days‘ (see video below) made it to #1 on the Icelandic charts when he was only 16 years old. Following up on that success, Mani soon released a debut EP, Wake Me Up, whose title track is super catchy and will certainly wake you/me up.  Since then, Mani has released a full album (Repeating Patterns, 2015) of folk/pop songs and plans to release another in 2017.  He must of fallen in love with his Spain (or someone from there, haha) during his all years of touring Europe, because now this Icelandic expat lives in Alicante.  Maybe this second album will have even more spice. Maybe it will feed all of our days, AND all of our nights… 😉

One thought on “Mani Orrason: “But freedom haunts me like it should haunt no one… And when I run through the trees I will run for everyone” – Iceland Airwaves (Nov 3, 2017)”