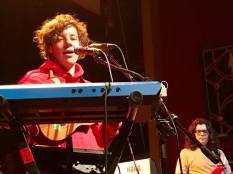 It’s too hard to truly convey how much love and admiration I have for Merrill Garbus, creator and curator of tune-yards. Her live performances evoke a visceral vortex of mixed emotions (aggression, desire, laughter, pain) that words can simply not describe. I still recall how feverishly my body was overcome with curiosity and vitality the first time I saw her perform at Outside Lands Music Festival in 2011. Since then, I had seen her a total of 5 or 6 more times (SASQUATCH! Music Festival, The Regency Ballroom, Fox Theater – Oakland, Electric Brixton, Live for Contemporary Colors), and I am STILL electrified by her power, a “powa” that “gives me thrills I can’t describe.” Yes, ‘Powa‘ (in addition to favorites like ‘Bizness,’ ‘Water Fountain,’ and ‘Gangsta‘), were some of the old gems that Merrill, Nate (bassist), and her new badass drummer (forgot his name!) treated us to last night at Mystic Theatre in Petaluma. I of course got a bit OUT OF CONTROL for ‘Bizness‘ and nearly lost my voice trying to shout along. That song gave the world a serious taste of such MUSICAL MASTERPIECES that can manifest from creative, clever experimentation with loops pedals, saxophones, and an untamed vocal chords (the way Merrill distorts her vocals to create a variety of sounds is simply something else). Merrill is simply MESMERIZING to watch, and last night was no exception. We were all glad to watch her perform new songs from her highly anticipated new album, ‘I can feel you creep into my private life‘ (thank gosh she has), scheduled to be released on Jan 19. Standout tracks for me were ‘Heart Attack,’ ‘Honesty,’ and ‘Colonizer,’ (although all were pretty freaking awesome), and most of these showcased Merrill on synths and drum kit, in addition to her notable ukulele. Merrill is a FEMALE FE-LION, and and I cannot be more inspired/empowered by the femininity, strength, and intolerance that she radiates out to her fans. I’m grateful for artists like her that are not afraid to share their passion with the world and believe they deserve a chance of changing it. She could not be more SPOT ONT when describing the vision of her music: “altering the way the music industry functions to positively and responsibly impact our communities and our people, to act not only as soothing pacifiers with music but also activators, inspiring innovators, and revolutionary booty-shakers.” I have so much love for this woman and cannot WAIT to see her again at Noise Pop in February.

Videos of entire set on my YouTube page (see below):