I first heard about Little May from a band called Passport to Stockholm around this same time last year when Passport was asked to open for Little May’s first London gig at The Waiting Room. Having seen Passport to Stockholm 5 times in 5 months (I became a loyal fan after first seeing them at Communion’s Bushstock festival in June) and having another commitment that night, I decided to pass on this gig. LATER, after listening to Little May’s self-titled debut EP, I nearly pulled my hair out in frustration for MISSING THEM. These Sydney-based Sirens had me hooked with every song on that EP, especially the track called Bones, which STILL remains to be my favorite (even after the recent release of their new album): “Do you feel it in your bones like I do?” they whisper with visceral rapture. YES, we certainly do.  🙂

Little May, comprised of long-time friends Annie Hamilton, Liz Drummond and Hannah Field, first had the idea to start playing together (“fooling around”) back in 2008 and didn’t become serious in this pursuit until 2012. They had no idea that their first song — Boardwalks — would be the SPARK that ignited an international fan base on sites like Spotify, Youtube, Hype Machine, and Itunes. This spark brought about significant attention from popular radio stations like Triple J in Australia and BBC Radio & XFM in the UK. Around the same time as their EP release (Oct 2014), Little May turned heads at NYC’s CMJ music festival and were selected as one of the “11 Breakout Acts of CMJ.” Continuing to ride this high wave (I wouldn’t even be surprised if one of them surfed), they sold out a string of shows across Europe (UK, Ireland, France) and played prominent festivals such as the Great Escape Festival (UK), Southside (Germany), Hurricane (Germany), and Best Kept Secret (the Netherlands). They also were asked by the powerhouse brother-sister folk-rock duo — Angus and Julia Stone — to join them a few months later on their Australian summer (Nov/Dec) tour. Having been a HUGE fan of Angus and Julia Stone for years, this raised my respect for Little May even more.

Realizing that they had a unique brand of dark-tinged folk-rock/pop with a trio of vocal harmonies alongside catchy guitars riffs and racy percussion, Little May reached out to Aaron Dessner to produce their album because they adore The National and attribute the legendary band as an inspiration to their sound. This bit of knowledge made me adore Little May just a LITTLE BIT more. ❤  It surely was a career-defining moment for them when Aaron agreed work with the band and produce their debut album in a 5-week recording stretch in upstate New York (Hudson). This collaboration has proved to be a successful one, for Little May’s debut album, ‘For the Company,’ is already receiving lots of buzz and avid fans like me are nodding with approval. What a treat it was to see the songs come to life this week at the Independent in San Francisco. These awesomely adorable Aussies immediately greeted the audience with a friendly “Hello,” emphasizing how excited they were to be here in Northern California and how appreciative they were of us to come out on a Monday night to see them. Liz said they were surprised to see the room almost full, but I in all honesty was expecting it to be busier (especially considering their sold out shows in Europe). At least that meant that I had more room to dance and sway to their hauntingly beautiful melodies and cinematic arrangements. 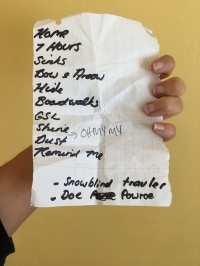 They kicked off their set with Home, and as an avid “jet-setter,” one really HITS home, especially with the lyrics, “I don’t think we’ll ever know till we get home.”

Following this was my new FAVORITE off their album, Bow & Arrow, which I’ve had on constant REPEAT over the past few days. This seductive standout (yes, that heavy baseline oozes all sorts of sexiness) was followed by Hide, one of my top tracks from Little May. I especially love how the prominent percussion adds ferocity and fury to those already powerful (RAWR) lyrics:

“I feel so haunted in your bed.
Is it me or is it her that’s in your head?
And you found it,
And you drowned it,
And you washed it clean.
Feed me words while you had her between your sheets,
Bet she likes that.”   (can’t help but throw my fist in the air and shake my hips!)

Little May introduced this one — Boardwalks — as the song that STARTED IT ALL for them — their very FIRST song and one that reminds them of what it’s like to be back home in Australia. I found out later from Liz that this is the song they are probably least proud of even though it’s is one of the most highly requested from fans. I love the buildup and anticipation around the last verse and the intensity that follows the last line.
“Cause we are not afraid of who we are but of what we have become
And we are not afraid of what’s to be when this road has just begun
So we will turn our backs and close the doors for the last time…
Give me back what’s mine.” (YES.)
From the very moment I heard this song (The Shine is Brighter at Night), I thought it reminded me of a song from the National’s recent album (almost like a slow version of Graceless). When I mentioned that to Liz after the show, she agreed and said that it makes perfect sense because the album was produced by Aaron Dessner of The National.

This was one of the songs I fell “knee deep in the dust” for when first hearing Little May’s EP last November. Upon seeing this live for the first time last night, I realized that it’s Liz’s vocals set the hauntingly beautiful intro. But the beauty of Little May is that they are three stunning Sydney sirens and their harmonies at about 1:40 min in when the drums let loose is really something special. I especially love the vocal arrangements with this climatic chorus:

I only predict BIG things for LITTLE May, and I look forward to seeing them again when they come back this summer for festival season in the states. We’d love to have them here with us in SF’s glorious Golden Gate park for Outside Lands Music festival 2016. Buuuuuut, my ONE REQUEST is that they PLAY MY FAVORITE SONG — Bones! 😛
To all of my Australian pals, keep a heads up for when they stop through town this Nov/Dec on tour with the amazing City & Colour.

One thought on “Little May: “The Shine is Brighter at Night””