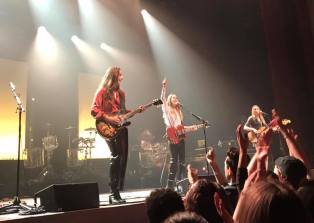 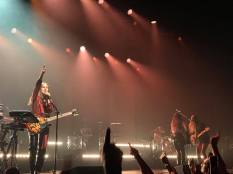 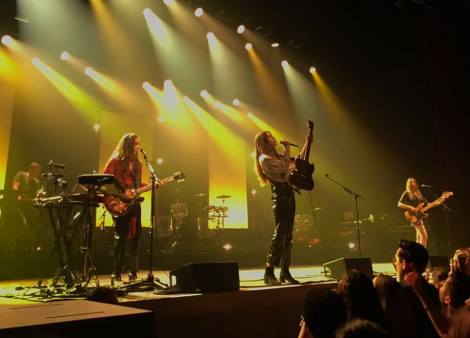 It had been 3 years since I last saw HAIM live, and Indy night they left more in awe than ever before. I nearly died when they kicked off their set with ‘I Want You Back,’ my favorite tracks from their new album (Something to Tell You), and was super impressed by the other new ones that they executed flawlessly: Little of your love, Something to tell you, Found it in Silence. We also couldn’t contain ourselves when they surprised us with a cover of Shania Twain‘s ‘That Don’t Impress Me Much,’ that exudes their female powerhouse feel-good vibes pretty perfectly. Etse (bass, vocals) even substituted the lyrics with (“ok, so you own a Tesla”) to reiterate that money/status “do not impress” the much. Haha. She def knows a thing or two about the Bay Area. Not too long after this cover, both Etse and Alan dive into the crowd for a legit crowd surf, while Danielle (sick with laryngitis) ran along the front railing to give hugs to those in the front tie (super cute!). Even with their patents in the audience (which they announced in the beginning), they weren’t going to censor themselves from being the outspoken, goofy, and sometimes salacious sister trifecta that we all know them to be. But the highlight of the night was definitely the pic encore for which ALL THREE of them BEAT THE SHIT out of the drums, each at their own unique rhythm. Luckily I’ve got video footage to revisit this whenever I need to feel empowered: “Don’t stop, no, I’ll never give up, And I’ll never look back, just hold your head up… And if it gets rough, it’s time to get rough.” HELL YEAH. I be HAIM-ing this one to myself all the time.  😀