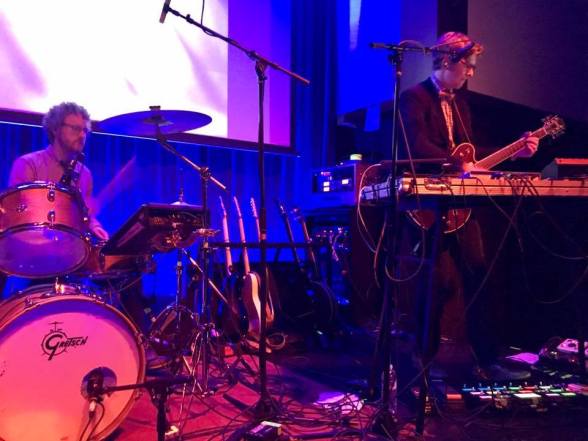 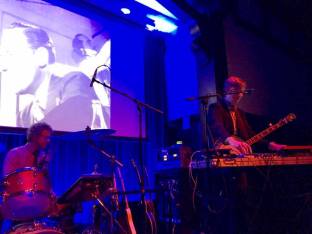 The last time I saw PUBLIC SERVICE BROADCASTING was at a 2,00 capacity venue in London about 3 years ago, and so it was pretty surreal to watch them perform only a foot in front of me in an intimate venue like Swedish American Hall AND to meet them afterwards (very nice guys!). I had a friend joining me for the shows and struggled in trying to describe their sound, as they really are in a category of their own. PBS’s J. Willgoose Esq. (guitar, banjo, samples), Wrigglesworth (drums, piano), and J F Abraham (flugelhorn, bass guitar, drums) together play live instruments in combination with samples from old public information films, archive footage and propaganda material that attempt to “teach the lessons of the past through the music of the future.” With a passion to “inform, education, and entertain” (listed to their song called ‘Theme from PSB’), PSB have consistently put out albums that do just that, and their recent albums (released July 2017) depicts the history of the mining industry in Wales. J Willgoose, Esq., described the album’s premise as an allegory for today’s “abandoned and neglected communities across the western world”, which have led to a “malignant, cynical and calculating brand of politics.” They also included a track (‘They Gave Me a Lamp’) to raise political awareness of a generation where women “seemed to realize, suddenly, the power and the potential that they had… It’s a song of gender barriers being broken down, of a group of people finding their voice, of the power of protest and its importance in a democratic society. Given what we’ve seen on both sides of the Atlantic in recent years, I don’t think there’s ever been a better time to be making such a strong case in defense of those ideas.” HELL YES. The last verse with collaborative vocals by the super-talented UK female trio, Haiku Salut (who coincidentally I discovered the same year as PSB at Green Man Festival), gives me chills every time: “I’ve been in front, I have never give in, I have never sat back, and I have never refused anybody, and I am very proud of it, and I’ll be proud to look back on it.” Cheers to a band pushing the envelope on both creativity and awareness. My favorite PBS tracks are: Spitefire, ROYGBIV, Theme from PBS, The Pit, They Gave me a Lamp, If War Should Come, and New Dimensions in Sound (exactly what they are creating!) ❤

2 thoughts on “Public Service Broadcasting: “It’s tiring, always stretching for something just out of reach… But I’ll get it. After all, what I want isn’t as easy as all that” – Swedish American Hall in SF (Sept 24, 2017)”