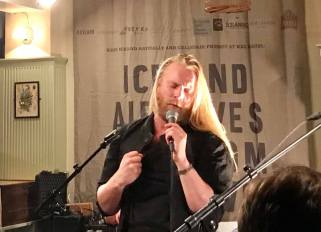 “I’m in love I’m in love I’m in love can’t you tell?”… I’M IN LOVE with this song ‘Moon pitcher‘ that Hogni wrote for his fiance in his debut album, Two Trains, released Oct 2017 by Erased Tapes record label.  Hogni quotes: “I feel I tried my best to create an honest and passionate piece of musical work and I hope you will find the time and space to enjoy it as well as finding that connection. As a musician you aspire to create that other world, that sense of hypnosis.”  I def entered that other world, “CAN’T YOU TELL.” 🙂 ❤

Hogni was one of my top new discoveries at Secret Solstice 2017, and I could not wait to see him again at Iceland Airwaves 6 months later. His deep vocals and ethereal, experimental electronic arrangements simply SLAY, and I was so happy to hear the new gems from Two Trains, an album that he describes in the following words:

“The music on Two Trains is a blue-print of a period in my life where I collided with my own self, and at that point I felt the indifference between the personal and the universal, the absolute consciousness of life’s unconsciousness. Perhaps it’s a feeling that cannot be conveyed, like watercolours that just seem to wash off into the sea. But also a flashing mirage that you can enjoy before you arrive at your last destination.”

Hogni also alludes to this album as a personal expression of the tugging dichotomies he faces while living with bipolar disorder: “I’m bipolar. I got very sick and it has affected my life drastically. This album bears witness to it… (In) the last few years, the swings have decreased in size. When I was the most ill a few years ago, I felt terrible, even if you couldn’t see it. There was just so much going on, lots of fun, and even excitement about going to the psych ward for the first time. Like I was going down a new path for myself. But I haven’t seen it as exciting since then.”

Previously known as frontman of the well-known indie rock band Hjaltalin and former member of ambient-techno group GusGus), Hogni proves that “Two Trains”, “change and metamorphosis” are his preferred method of transportation in this journey we call life. His “I can do whatever I dream” (lyrics in one of the videos below) is infectious and his tenacity for movement and exploration are an inspiration to us all: “My life is untethered, in many ways,” Högni says. “I try to focus on making good music and seeking inspiration, chasing experiences, travelling and finding adventures.

Aside from fronting two touring bands, Hogni has made time to score numerous theatre pieces, most notably The Heart of Robin Hood (dir. Gísli Gardarsson), staged by The Royal Shakespeare Company in 2011 and Angels of the Universe (dir. Thorleifur Örn Arnarsson), the Icelandic National Theatre’s 2013 adaptation of a well-known and loved novel and film of the same title.mHe has also written music for film and television, including a well-received score for short film Víkingar (dir. Magali Magistry, 2013) which won the Golden Rail award and was nominated for the Discovery award, both at the Cannes Film Festival. There really is no telling where his “Two Trains” will take us next. I don’t know about you , but I am surely ALL ABOARD. ❤