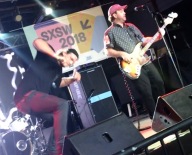 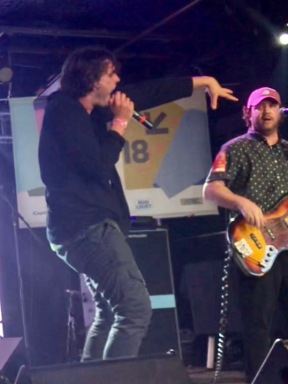 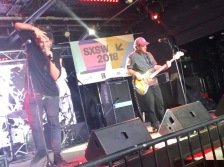 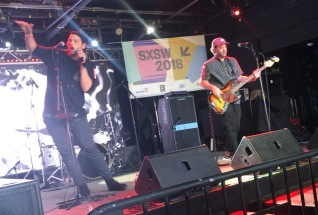 ABSOLUTELY ECSTATIC to CATCH THE MAGIC once again after catching it last year at SXSW (see review here). Magic Bronson was my FAVORITE NEW DISCOVERY OF SXSW 2017 and were the only band (aside from Caught a Ghost) that I saw twice. The magic behind Magic Bronson lies in their ability to unleash the rebellious, primal, theatrical beast that lives inside us all. It only takes a few minutes of watching Michael Nicastro beat his chest, smack his face, stomp the stage, and pierce his lungs (roaring with chest out, arms up), for you join in this disturbed, erratic behavior and feed your inner beast. I’ve been to THOUSANDS of shows, and Mike still remains to be one of the most ENTERTAINING FRONT MEN I’ve ever seen. Again and again he delivers a performance comparable to Heather Leger as the Joker in Dark Night, and is even known to BREAK A FEW STAGES with his mighty “I am Mountain,” aggressive stomping.  I don’t think many bands can say they’ve buckled the first stage they set foot (Maggie Mae’s) on as part of their SXSW showcase. HAHA. When Magic Bronson makes an appearance, they LEAVE A MARK. The combination of Mike’s joker performance and captivating vocal delivery and Matt Lieberman‘s killer bass translates into an infectious dance experience of pop, rock, hip-hop, and electronic that I find difficult to compare to any other band (and I’ve seen thousands). I cannot WAIT until the next SXSW to see them again, and I hope they will spread their magic up the west coast very soon! After all, LA is not too far from SF. No excuses! 😛
(see below for full videos of the entire set)

‘Night Owl‘ is one of my Magic Bronson FAVORITES and I’m waiting with baited breath for them to finally release it. I love the intro line (“Say something, say it real quick, I’ll throw it at the wall and see if it sticks… I’m erratic, I need a fix, I’m brushing off the dirt of my fresh white kicks”), and I can’t help laugh/shout (simultaneously) when Mike puts his hands over his head and widens his eyes (impersonating an owl) as he devilishly shouts, “I can’t take MY EYES off of you… I’m just trying to to GET A RISE out of you.” Oh YES. A RISE has certainly been had. ❤

“I can feel your energy, running your your hands, makes the hair on the back of my neck just stand.. oh yeah, i Like to act tough, when I’m in your arms it’ll always be enough… ELECTRIFY!!” Yaaaaaaaas. I was highly entertained by the stomping around and shaking out of the hand for ‘Electrify.’ I also was dying at the part when Mike said “It was making me feel… LIKE A MAN” (dramatic impersonation). So much primal male emotion in this one.

“Good enough just doesn’t make it, kid you gotta take it into your own hands, OH MY GOD, it’s making sense, with all this time we’re sitting on the fences.” YAAAAAAAS. Freaking STALK THIS ONE: ‘Fences.’ I absolutely love roaring along to the chorus (not giving a shit about how loud I am) and joining in the rebellious rally of doing what you want and OWNING IT. I also love when Mike shouts “We finally made it” and follows with a villainous “HA HA” laugh like he Joker. Right after this song, Mike says, “so that one’s about you guys being so nice to each other all this time. We really appreciate that. We fucking LOVE that,” and then asked us all to hug the person next to us. We fucking love YOU!

“These are the days We get stuck in our ways Solving mysteries.. And these are the nights That we stay inside Making history (history, yeah, yeah)… Yea, what about that All the things that make you nervous Crooked cops and guilty verdicts Fires, floods, parking permits!” YAAAAAS! Another super catchy track (‘Nervous‘) that makes you want to go APE SHIT and scream at the top of your lungs. Makes me NERVOUS for the other people around met. SO FREAKING GOOD.

I like to think of this one (‘Knock it Off‘) as the anthem for rebels: “Go up to the bar and make some small talk, raise our glasses up high until we can’t walk, best friends fist fighting in the parking lot, cowboys dressed as cops telling us to ‘Knock it Off'” after which Mike and Matt point fingers at each other (mimicking cops) and then unexpectedly belt out “BUT WE WOOOOOON’T.” Yaaaaas. Raging like a rebel has never been so fun.

Parking tickets in SF are more than 65 bucks! Try 76…. I’m pretty sure we can all relate to driving chaos in LA, and I’m pretty sure we’ve all responded in the same way: “What the FUUUUUUUCK.” ‘Drive‘ is the newest addition to their set.

If this song (‘Wake Up‘) doesn’t wake you up, I don’t know WHAT will. There’s a reason they save this one for the anchor, cause it’s definitely going to anchor you as a Magic Bronson fan for life. The buildup and impeccable timing of Mike’s explosive “WAKE UP” outburst are definitely going to have your carotids bulging from you neck (at least I know mine were).

“I am a man
I am a mountain
I’ve lost track
But hey who’s counting?

So we sit around
Playing truth or dare
And for once the truth is all I want to hear
You’ll dig through my records
It’s all I really want
And when you do I know you’ll pick my favorite song… and it goes..”  (CHEEKY!)

Meeting the 6’6″ “Mountain” that is Michael Nicastro! One of the most entertaining front men to watch!

One thought on “Magic Bronson- “Say something, say it real quick, I’ll throw it at the wall and see if it sticks… I’m erratic, I need a fix, I’m brushing off the dirt of my fresh white kicks” – Empire Control Room at SXSW (March 16, 2018)”