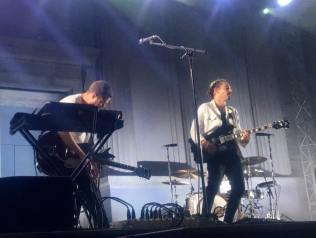 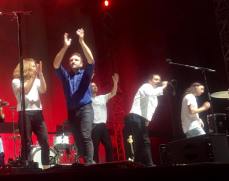 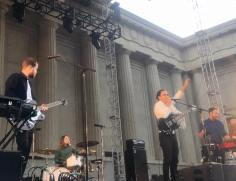 (more pics and videos below)

Stoked to have FINALLY caught Local Natives on local land after last seeing them in Edinburgh (Electric Circus), Wales (Green Man Festival), and London (Brixton Academy) back in 2013. That year spoiled me silly, and the memories I have from those shows almost (almost) make up for the 3 ½ year hiatus. Seeing them in that tiny 250, venue in Edinburgh had me on cloud nine for WEEKS, and the fact that I bumped into Taylor (lead vocals/guitar), Ryan (guitar/vocals), and Nik (bass, keys, vocals) that same night for a “wee chat” was also pretty freaking amazing. Then they were announced to play Green Man, a super casual festival where it’s not too uncommon to spot bands hanging out in the crowd watching other bands (and yes, I was indeed lucky enough to find myself dancing next to them during one of the sets). A few months later was their London show at Brixton Academy, and although it was not nearly as intimate as the Edinburgh one, I was happy to have met Kelcey after the show with my best friend Amanda (who was visiting from Philly). Pics below.

Fast forward to last Friday (7/28) at the Greek Theater in Berkeley, and I am grinning ear-to-ear as I wait to bask myself in the beauty of their Sunlit Youth (2016 album). I nearly DIED when they opened with ‘Past Lives,’ a song that slayed me from the start with it’s opening line, “Save me from the prime of my life” (which I am considering as a text tattoo). I love the capricious cadence to this song and the piercing percussion after the chorus of “Then you wake up.” YAAAAAS.  😀

Taylor had us smiling wide when he dedicated the next song (‘Villiany’) to his 1 ½ year old niece Emma, it being her first ever show – he said this one was her favorite! He even posted a clip of her shaking her booty to it in the crowd on Instagram the day after.

Kelcey then asks the audience if anyone is from SF state, and then laughs as he admits wanting to go to Berkeley but only getting into SF state. He then introduced their next song, ‘Airplanes,’ as one he wrote after leaving SF state and heading back to Los Angeles. He followed up with a special version of the hauntingly beautiful, somber tune, ‘Columbia’ (“Am I loving enough?”), that he said the SF Bay Area has never heard before. Tears def welled up in my eyes.

They then surprised us with a new song called ‘I Saw You Close Your Eyes,’ which is KILLER and one I connected with right away. Their new song, ‘The New Heirs’ is also pretty siiiiick too. Next came ‘Jellyfish’, ‘Heavy Feet’, ‘Dark Days’ (with Ryan filling in for the female vocal part and turning heads with his perfect pitch) and ‘Who Knows, Who Cares,’ a song that references “going down to Colorado” — pretty eerie considering that the band recently visited the Colorado river in Arizona to advocate water conservation in Episode 103 of the nature series, Earthworks. This was a project they felt very strongly about, considering that the Colorado river is the main sources of water for California, a state near in dear to their heart and one that is in the 6th year of the worst, most epic drought in modern history (compounded further by climate change and population increases). Aside from showing activism on the water conservation and green energy front, Local Natives have made it a point to show activism on the political front. In fact, Taylor was involved in a panel called the “Politicon” at the Pasadena Convention (July 28/29). That night, Taylor reminds us (during his intro to ‘Fountain of Youth’) that the power is in the hands of the future generation:

“This next song has the idea that it’s the new generation every single time that gets to decide where the world is going to go. It’s the new generation that can see it for what it is an i think pushes it where we want it to be and for us, we just wanted to say, especially being here where, that idea idea was birthed a lot for America, that we have a choice to choose unity and to choose love and respect and respect for everybody. And we would just like to push that forward, no matter what you can do, your influence on the world, we would just like to push for that. “

And if we don’t change, Then who’ll change?

We’ve been dreaming of you, Drinking from fountains of youth.”

(Hell YES. Power to the people)

Cheers to a band that uses the stage to motivate change for the greater good. I have so much respect and adoration for these local natives Cali pride). Stay humble, stay hungry. Stay thirsty for that “Fountain of Youth.”

Taylor, quenched by this fountain of youth, dives into the crowd for a bit of surf and then lies on his back, projecting peace and love to all like a prophet.

In true Local Natives fashion, they end the night leaving us in good hands – ‘Sun Hands.’ The energy and aura of this epic encore never fails to disappoint.

All Local Natives fans must check out Kelcey’s new solo project called Jaws of Love. His debut album, Tasha Sits Close To The Piano, named by his wife after their dog Tasha, is coming in the fall, and earlier this month. The lead single, ‘Jaws Of Love,’ is simply stunning — Kelcey’s falsetto vocals elevating over deep, brooding piano ballads. “The whole project is me trying to embrace my nuances and indulge in it,” Ayer explains. “It was such an awesome release making these songs, and that let me embrace who I feel like I am. It was wonderful to not have to explain myself to anyone. I have dark piano music in my heart and soul, and Jaws Of Love. is me at my truest self.” We certainly approve. ❤ 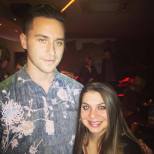 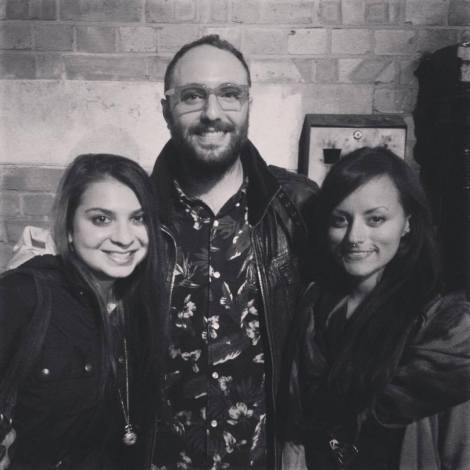