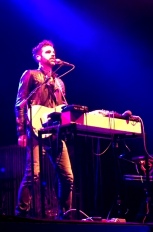 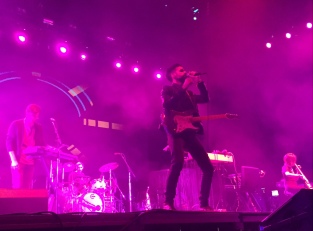 Finally getting around to posting my pics from Geographer‘s EPIC SET at THE BIG ONE NYE event in San Francisco (Bill Graham Civic Center). I was surely grinning EAR-TO-EAR when they played my favorite three cover songs from their recent EP, Endless Motion: (1) Paul Simon‘s ‘I Know What I Know, (2) Arthur Russel‘s ‘This is How We Walk on the Moon‘, and (3) New Order‘s ‘Age of Consent.’ Can’t WAIT for their upcoming tour! 🙂

Could not have imagined a BETTER WAY to kick off 2016 than to be ROCKING OUT in SF to one of my FAVORITE SF bands of all time — Geographer had my head-bopping hard and grinning wide with their AMAZING NYE SET, including the EPIC COVER of Paul Simon‘s ‘I Know What I Know.’ SO SURREAL to finally hear this LIVE after listening to it NON-STOP for WEEKS since it’s release (Endless Motion EP) in early December! My heart is full. ❤

Can’t even EXPLAIN my anticipation for FINALLY hearing this song LIVE after being first hearing it 2 years ago and being HYPNOTIZED. That catchiness cadency behind that cello’s siiiiiick undulating rhythm is simply ADDICTIVE, and it’s a sure fire way to keep “moving me up” throughout any circumstance. This one will DEFINITELY be on my playlist for the San Francisco marathon in July. “Every step is moving me up…EVERY STEP IS MOVING ME.”

Geographer ended their AMAZING SET at THE BIG ONE NYE event with this gleeful gem. It’s hard to not smile widely and grin as your shake your hips (as per Mike’s request midway through) and bop your head to beats of that wood block. EPIC ENCORE with a SIMPLE New Year’s resolution: